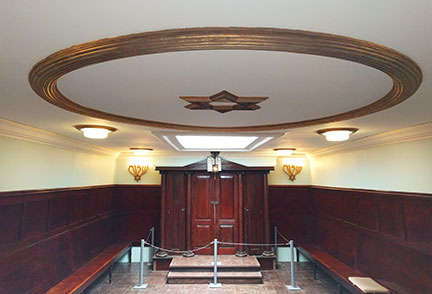 Eastern State’s synagogue was almost certainly the first built in an American prison. Completed around 1924 and used continuously until the penitentiary closed in 1971, the space had fallen into near total ruin after the penitentiary’s abandonment. The synagogue marks the first truly restored space in the penitentiary, faithfully returned to its appearance in 1959, with dark wooden benches surrounding the room, a beautiful ark, Reader’s Table, ornate plaster Star of David, and an eternal flame.  A set of workshops next to the synagogue has been converted into The William Portner Memorial Exhibit on Jewish Life at Eastern State Penitentiary.

The Alfred Fleisher Memorial Synagogue and The William Portner Memorial Exhibit on Jewish Life are on view during all public tour hours. Included with admission to the historic site.