Judith Schaechter: The Battle of Carnival and Lent 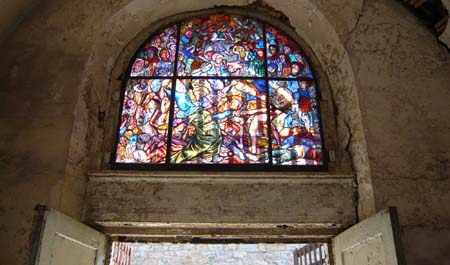 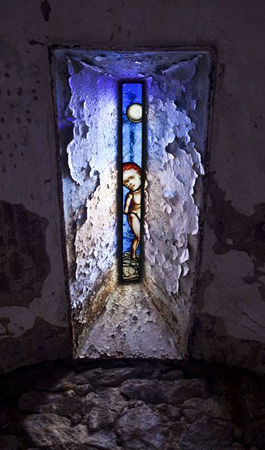 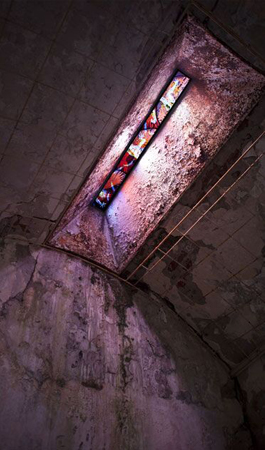 Eastern State Penitentiary Historic Site welcomes Guggenheim Fellow Judith Schaechter’s ambitious new work, The Battle of Carnival and Lent, to its 2012 artist installation program. These 17 stained glass windows are inspired by the prison’s dark history and installed in historic skylights throughout Cellblocks 8, 11, and 14 for the duration of the 2012 season.

The Battle of Carnival and Lent responds to the penitentiary’s narrow skylights and arched windows. The imagery, which Ms. Schaechter describes as “addressing in a non-religious way the psychological border territory between ‘spiritual aspiration’ and human suffering,” is evocative of theology but secular in purpose.

The figures depicted are literally confined by the unnaturally tall and skinny apertures of the window frames – squished, cropped, straining, and reaching – as a representation of the types of incarceration that are basic to the human experience. Ms. Schaechter balances them with more traditional, cathedral-esque stained glass windows, based very loosely on the design of 13th century European cathedral windows (e.g. Chartres). Her intention is to draw an association between the prison’s original purpose – to provide an environment conducive to self-reflection and, ultimately, penance – and the harsh realities of solitary confinement.

Ms. Schaechter’s past work has almost entirely been installed in museums and galleries as panels over lightboxes. The Battle of Carnival and Lent is unique for both its response to a specific environment as well as for its use of full-spectrum light to illuminate the windows. Ms. Schaechter is often asked which architectural setting she sees as ideal for her work, and her response is always the same…Eastern State Penitentiary. Explains Ms. Schaechter, “ESP is precious to me. It’s my hometown. It’s my place.” 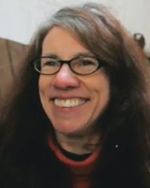 About the Artist:
Judith Schaechter has lived and worked in Philadelphia since graduating in 1983 with a BFA from the Rhode Island School of Design Glass Program. She has exhibited widely, including in New York, Los Angeles and Philadelphia. She is the recipient of the Guggenheim Fellowship, two National Endowment for the Arts Fellowships in Crafts, The Louis Comfort Tiffany Award, The Joan Mitchell Award, two Pennsylvania Council on the Arts awards, The Pew Fellowship in the Arts, and a Leeway Foundation grant, and she is a 2008 USA Artists Rockefeller Fellow. Her work is in the collections of the Victoria and Albert Museum in London, the Philadelphia Museum of Art, The Corning Museum of Glass, The Metropolitan Museum of Art in New York, The Renwick Gallery of the Smithsonian Institution, and numerous other collections. Ms. Schaechter has taught at The Pilchuck Glass School in Seattle, The Penland School of Crafts, Toyama Institute of Glass (Toyama, Japan), Rhode Island School of Design, and The Pennsylvania Academy of the Fine Arts. She currently teaches at University of the Arts and the New York Academy of Art. Ms. Schaechter's work was included in the 2002 Whitney Biennial and The 2011 Venice Biennale.

Listen to the Audio Tour Stop 1

Listen to the Audio Tour Stop 2

Listen to the Audio Tour Stop 3

Artist installations are supported in part by the Pennsylvania Council on the Arts, a state agency funded by the Commonwealth of Pennsylvania, and the National Endowment for the Arts, a federal agency. Arts programming is also made possible with funding from Eastern State’s Halloween fundraiser.

Judith Schaechter’s work appears courtesy of Claire Oliver Gallery, New York, NY. It was funded on USA Projects, an initiative of United States Artists. The artist thanks the 81 generous donors who help fund the project through this initiative.